Print Chapter
Report Abuse
Reviews (5)
Previous Next
*Author's note: I do not own anything HP

The references to Occlumency are from HPHBP chapter 24. Some of the information is changed or paraphrased slightly, as this is an entirely different scenario, but the main points come straight from the book.* 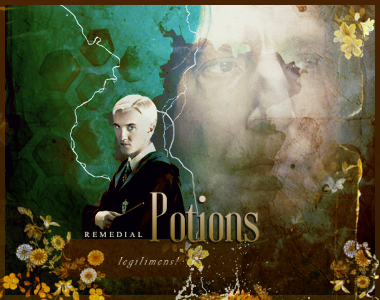 Beautiful CI by beyond the rain @ TDA!


Professor Snape told Draco to meet him in his office the following Monday evening. Draco still could hardly believe that Snape had even agreed to this, but all the same showed up five minutes early, eager to get started. Another meeting with the Dark Lord was bound to be happening soon, and Draco wanted to be prepared. He couldn’t risk the Dark Lord finding out about his friendship with Ginny. The Dark Lord would stop at nothing to control people, and he was not above using an innocent girl to control Draco.

And it would work, Draco thought with a sudden realisation. If the Dark Lord threatened Ginny, Draco knew he would do anything to keep her safe. Of that much, Draco was acutely aware.

“Now,” Snape began, after both of them had taken a seat. “This office is one of the only completely secure places at Hogwarts. Anything that is discussed in this room will not be discussed anywhere else, with anyone else. Is that clear?”

Draco nodded eagerly, wondering in the back of his mind where the other ‘secure’ places might be.

“I believe we should begin with going over some of the theory behind Occlumency, before delving into the actual practice.” Snape cleared his throat. “The first thing you must understand is that the mind is not as a book. One’s thoughts do not come written on flat parchment with words and pictures. The mind is more complex than that. Like the Earth itself, the mind is like a globe, full of layers and colors, with peaks and valleys, deep oceans of emotion, and thoughts on every different level.

I assume this enthusiasm for learning Occlumency is not just a sudden fancy. You have something to hide...” He paused and Draco paled slightly. “There is nothing wrong with wanting to protect your innermost thoughts and secrets, Draco, as long as you are successful at it. By mastering Occlumency, you will be able to shut down those thoughts and emotions, thereby turning your thoughts into lies. Almost as if you are locking them away into a hidden compartment in a suitcase. Does this make sense?”

Snape continued. “Be warned that attempting to lie to the Dark Lord could have deadly results.” His black eyes bore into Draco’s, and Draco shrank slightly. “Whatever secrets you have, whatever you are trying to hide, must be worth your life. Is it?”

Draco didn’t even need to think about it. “Yes."

“Then let’s begin.” Snape raised his wand. “I will seek a memory, and you must try to change it. Distort it to reveal only what you wish. You must try to lie to me.”

“But how--” Draco started, but Snape ignored him.

Draco felt as if he was reliving his childhood at top speed. Images raced through his mind too quickly for him to focus on them. He could feel Snape prodding uncomfortably at different memories. It was an odd, uncomfortable sensation. Draco tried to concentrate . . .

He was four, watching his parents argue loudly over something he didn’t understand. Why couldn’t he keep the kitten he had found by the river? . . . He was seven, and a squat, withered-looking witch in an apron -- his nanny -- was calling his name while Draco, giggling, hid in a tree . . . He was bouncing with excitement, about to rip open his Hogwarts letter when his father plucked it out of his hands and read it for him -- Draco didn’t even get to see it . . . The memories came faster now . . . He was twelve and shaking with fear because something was creeping through the castle petrifying students, although he hid his fear under arrogance and spite . . . He was holding his stinging face after Granger had hit him . . . He was laughing in the Restricted Section with--

No, thought Draco, pushing back. Not that, not there... The memory changed slightly, and although bright laughter could still be heard, it was distorted, as if it were underwater. Draco was now sitting alone in the library with just his homework . . .

As quickly as it began, it stopped. Snape’s office swam into focus. The back of Draco’s head was prickling uncomfortably. He dropped his head into his hands and massaged his the back of his neck while Snape stood over him with a curious expression on his face. It almost looked like pride.

“I am surprised, Draco,” said Snape after a moment. Draco looked up at him, the room still spinning slightly. “You took a while to gain control. But I am very surprised that you were able to push back. Others have not been as successful on their first time,” he sneered. “Next time, don’t be so obvious about what you’re hiding. You must have your thoughts already altered before I even seek them. Changing them right as I reach for them signals to me that you are hiding something. The Legilimens will try even harder to break through.”

“You could have told me that before you went digging through my brain,” Draco snapped, annoyed at the oncoming headache and his Professor.

“I believed you would be capable of pushing back when you needed to, and I was correct,” said Snape candidly. “Now, clear your mind. We will try again.”

Draco left the Headmaster’s office some time later feeling as if he’d just played in an excruciatingly long Quidditch match. Which, of course, couldn’t be the case, as Quidditch had been cancelled at the start of term. It was late, almost curfew, but he headed for the library anyway. After his stressful evening, trying to block Snape from accessing his memories, he just wanted to see her, if just for a minute...

He ducked under the rope that was strung across the entrance to the Restricted Section and quietly sneaked to his corner. Their corner, as he’d come to think of it. A familiar redhead looked up at him from her spot on the floor and Draco’s face broke into a grin.

“Hi,” said Ginny breathlessly. She smiled awkwardly and her cheeks were pink.

“Hi,” answered Draco. He sunk to the floor beside her. Any trace of his headache had mysteriously vanished at the sight of her.

“Where’ve you been?” Ginny asked, fidgeting with her quill. “It’s almost curfew. I was worried about you.” She tilted her head questioningly and her long hair spilled over her shoulder.

Draco’s heart thumped loudly in his chest as he looked her over. The bruises on Ginny’s face had faded nicely. They were almost unnoticeable, and her split lip had healed completely. She was beautiful. Draco just gazed at her. He wondered how the lashes on her back were healing, and remembered the feeling of her fingers running through his hair. He wanted to feel that again, he wanted to--

“What?” He snapped out of his thoughts quickly, remembering Ginny had been speaking to him.

She blushed again. “Nothing. I asked where you’ve been, but you don’t have to answer, of course. I mean--”

“Oh.” Ginny’s eyebrows raised intuitively, but the knowing expression was wiped from her face so quickly Draco thought he must have imagined it. “Interesting. I didn’t know Slughorn did Remedial Potions for seventh years,” she said carefully.

“He doesn’t, at least not that I know of,” Draco explained. “Professor Snape thought it’d be best if he tutored me himself.”

Ginny’s eyes narrowed thoughtfully as she took this in, but then her mood shifted and she smiled brightly.

“Okay. I think it’s good to keep your marks up, even during troubled times. Speaking of time, what time is it now?” she asked, changing the subject. Without waiting for an answer, she twisted Draco’s arm towards her so she could see the face of his watch. He rolled his eyes, secretly thrilled that she felt comfortable enough with him to do that. Ginny’s smile faded slightly as she read the time. “Listen, I’ve got to go soon -- don’t want another detention --” An angry growl escaped Draco. Ginny gave him a humorless smile and continued, stumbling over her words. “Anyway, I -- I’m glad you came here. I wanted to talk to you, to thank you...again, and...” She paused uncomfortably, biting her lip and wringing her hands. “I just -- I don’t understand -- I mean -- it’s not --”

Ginny shook her head. “It’s not, though. It’s not fine. I mean, I really appreciate it, of course, although I’m sure I could have managed, but I just don’t understand why you’re so nice to me, when--”

“You’re sure you could have managed, really? Come off it. And didn’t we already establish this, Ginny?” Draco grinned at her. He loved that they were suddenly on first-name terms despite the events that led to it. “I’m not as bad as I pretend to be, remember?”

“But you are bad!” she whined in a poor imitation of him, but then became more serious. “Really, though, isn’t it dangerous for us -- I mean, for you, a-and for me--”

“Listen,” Draco interrupted. “It’s fine, really. No one knows that we’re friends--” Ginny’s eyes flicked away and back to him quickly “--and no one’s going to find out. I’m making sure of it.”

Ginny hesitated for a moment, clearly wanting to say more. She didn’t, but instead sighed and leaned her head against him. Draco carefully wrapped his arm around her shoulders, pulling her closer to him.

“Aren’t you worried?” she asked. “About what could happen to you, if someone finds out--”

“You’re nutters, you know that?” Draco felt almost giddy. He relished the feeling of being so close to Ginny. “You’re the one who gets tortured, yet you’re worried for me.”

Ginny laughed. “Well, I can’t help it. You’re like my knight in shining armor,” she teased. “I don’t particularly like being saved, but if I had to be, I’m glad it was you.” She turned to smirk at him. Draco held her gaze for a moment, when suddenly Ginny’s smile slid off her face. She pushed away from him and stood up quickly. “I should go,” she said, grabbing her bag off the floor.

Draco scrambled to his feet. “Wait,” he said, reaching for her. “Did I do something wrong?”

Ginny let him take her hand, but wouldn’t face him. “No, I just -- I need to get back before curfew.” Her hand tightened in his for a second, then she pulled away. “I’ll see you later.”

A sharp pain went through Draco’s head. The exhaustion from practicing Occlumency with Snape came back to him full-force. He waited a few minutes to give Ginny a decent head start, and then headed back to his own Common Room.

Do you know where the other 'secure' places are in Hogwarts?
How do you think Draco will do with more Occlumency lessons?
What do you think Ginny's thinking and feeling?