Print Chapter
Report Abuse
Reviews (6)
Previous Next
*Author's note: I do not own anything HP* 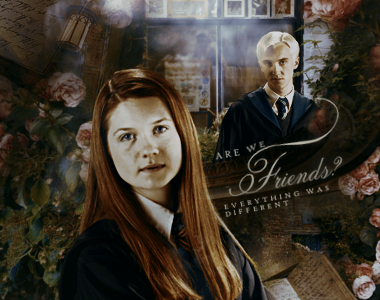 Beautiful banner by beyond the rain @ TDA!

The next morning Draco sat at the Slytherin table, picking at his toast. Normally he wouldn’t have bothered coming up to breakfast at all, but he needed to see her, to make sure she was okay. He faced the entrance of the Great Hall, waiting to see if Ginny had indeed gone to Madam Pomfrey. Soon enough she walked in with her usual group of Gryffindors. She kept her eyes down, not participating in the conversation. She must have felt Draco’s eyes on her because she looked up suddenly, making eye contact with him. He gave her a significant look and got up from the bench.

“You haven’t even eaten!” Blaise called after him. Draco just waved him off and headed out of the Hall. He sat by a staircase, partially hidden by a statue, until he spotted Ginny leaving the Hall.

“Over here,” he hissed. She jumped in surprise, but followed him toward a secluded alcove. When she was close enough Draco took a long look at her. Her bruises were fading quickly. If he hadn’t seen them when they were fresh, he wouldn’t have even known they were there. She looked like she had slept just about as much as Draco had. Which meant, of course, not at all. Dark purple circles rimmed her usually bright eyes and she moved stiffly.

“Er...wonderful?” She shifted awkwardly. I’m an idiot, Draco thought to himself.

“I mean,” he began again, “Did you make it to the Hospital Wing this morning?”

She wouldn't meet his eyes. “Oh. Yeah,” she said, lowering her voice and looking around to make sure they were alone. She played with the end of her long ponytail. “Pomfrey gave me a potion for my throat and mended my bruises and broken rib in less than--”

“Not so loud!” she hissed, looking around wildly.

Draco felt sick again. Hot anger spread through him as he tried not to think about how she got that broken rib. His vision went red for a moment and he closed his eyes, trying to calm himself. A hand touched his arm and he opened his eyes to see Ginny looking up at him with that same strange expression she wore when she studied him.

“It’s okay,” she insisted. “I’m fine, really. See?” She pushed on her side to show him that it didn’t hurt, and failed to hide a grimace. “Okay, so it’s still a little tender, but really, I’m fi--”

His tone made Ginny tense. “Why do you even care?” she challenged. She folded her arms against her chest and leaned away from him.

Draco groaned in frustration. Was she always like this? How Potter could even stand to be around her for more than five minutes at a time was beyond him. Stupid, frustrating, insane--

“I don’t have time for this,” Ginny said, interrupting his thoughts. “I’ve got to get to class because, unlike some people--” she shot him a pointed look “--I will actually be punished for being late. Again.” She pushed past him and he grabbed her hand, ignoring the light electric shock he felt when his skin touched hers.

“Just...be careful.” He looked at her intently. She looked back at him for a moment, then ripped her hand out of his.

“Whatever, Malfoy,” she said. “See you around, I guess.” She strode away from him and didn’t look back, leaving him feeling completely stupid.

After three interactions with Ginny, Draco decided the best thing to do was to just stay away from her. She was the most difficult, most infuriating person he’d ever come in contact with. If she got into trouble, then that was just too bad for her. He was done helping. He successfully avoided her for a full week, and he was perfectly okay with it.

Of course, that’s what he told himself. Draco would never admit it, but he actually missed Ginny. The few moments they had spent together seemed like the only bright spot in his life. She was the only person who had looked at him without hate in her eyes, even if it was only for a few minutes. He often found himself wondering how she was doing, and thinking about her dark eyes and fiery hair.

One afternoon after wandering aimlessly, trying not to think about Ginny, Draco found himself in the library. She won’t be there, he told himself as he made his way to his corner in the restricted section. Still, his heart sank just a little when he was right. The corner was empty. He huffed with disappointment as he dropped to the floor and pulled out his homework. A few minutes later he heard someone approach him.

Draco looked up in disbelief. Ginny was standing near him, fidgeting awkwardly.

“Hey,” he said back in what he hoped was a casual voice, mentally cursing himself when his voice cracked. He tried to keep the stupid smile from climbing his face and ended up looking like he was in pain. Ginny giggled.

“No! Sit!” Draco cried almost too desperately. He cursed himself inwardly and changed his tone. “I mean, yeah, that’s fine.”

She smiled and sat against the wall beside him. Draco didn’t know what to say. Not wanting to make himself sound even more idiotic than he felt, he kept his mouth shut. Ginny pulled out her homework as well and they worked in silence for a while. It was a comfortable silence, Draco thought. Neither felt the need to speak until Ginny suddenly looked up from her homework.

“You took History of Magic, right?” she asked hesitantly. Draco nodded and she continued. “It’s just… I’m having trouble remembering all of those Goblin rebellions. Could you…?” She held up the essay she had been writing.

“Oh. Yeah.” He took the essay from her and he quickly skimmed through it. “You mixed up Borog the Bloody and Bagor the Basher,” he said, handing it back to her. “Honestly, though, I barely scraped by in History.” He gave her a grim smile. Ginny giggled again. They spent a few minutes going over her essay and ranting about the boring class and its ghostly professor. Draco was surprised by how easy their conversation was. They were even laughing together. It was like they each forgot who the other really was, a blood traitor’s daughter and a pureblood Death Eater. She must have remembered the same time he did, because she suddenly grew quiet.

“I should go,” she said, not meeting his eyes. She piled her things into her bag as she stood. Draco stood with her.

“You don’t have to,” he mumbled. Ginny paused for a moment.

“I plan to do my homework here tomorrow, after dinner,” she said. Draco frowned. Why was she telling him this? “If you were already here,” she continued, “I wouldn’t make you leave or anything.” Draco still didn’t get it, and Ginny rolled her eyes. “I’m going to be here tomorrow,” she repeated slowly, as if she was talking to a small child. Suddenly it clicked.

“Oh!” Draco said, finally getting it. “Right. Okay.” Ginny smiled and left him. He felt stupid, but he also felt strangely excited. He was eager to spend more time with Ginny, the girl who didn’t treat him like a Death Eater.

Over the next two weeks, Draco and Ginny met “accidentally” in the library every few days. Mostly they just did their homework quietly. Ginny was very smart, and was able to help Draco on a few of his own assignments that he was struggling to finish.

One evening as they sat in silence, with nothing but the sound of quill on parchment, Ginny suddenly spoke.

“Malfoy, are we friends?” she asked, uncertainty in her voice. Draco looked up. Ginny looked nervous, her eyebrows furrowed delicately. Draco took a minute to respond.

“Yeah, I think we are,” he said finally, and Ginny's face broke into a smile.

“I thought so,” she said, and went back to her homework.

Draco couldn’t stop grinning. He had a friend. A real friend, who willingly spent her time with him, for no other reason than that she wanted to. Not a Death Eater or someone his parents forced him to spend time with.

They became more comfortable with each other after that. Ginny let herself sit closer to Draco, and he let himself laugh more. They talked about their days. Sometimes they would talk about school or their friends. Draco was very careful not to mention anything about Potter. Ginny seemed to tense up whenever the conversation began to steer that way, so he tried to avoid it. He knew Ginny didn’t know where Potter was, and truthfully, he didn’t want to know either. As much as Draco hated Potter, he actually wanted him to succeed. If Potter could get rid of the Dark Lord, Draco would be free. Free from being a Death Eater, free from his father, free to be friends with whomever he wanted. Even Ginny.

In the back of his mind, Draco knew how dangerous it was for him to friends with Ginny. If anyone caught them… He couldn’t let himself think about it. No one went into that corner of the library, and they were careful to be just as nasty and spiteful toward each other as they used to be. It became a game, making up insults and laughing about it later on. As far as Draco knew, no one could tell that anything was different.

But everything was different.

Draco found himself thinking of Ginny more and more. She laughed with him and teased him, but she was kind to him. It wasn’t just that, though. As Draco spent more time with her, he had more opportunities to look at her. He always knew she was attractive -- every boy in the castle had noticed Ginny Weasley. But he began to notice the little things about her... The way her eyebrows knit when she was worried about something, or struggling with a difficult assignment; how her dark red hair, usually tied up in a ponytail, swayed back and forth as she walked; how her face lit up when she saw him, almost like he was the first good thing she’d seen all day.

*I've been lucky enough to find the queue with an unnaturally short wait lately, and have been able to get these chapters up pretty fast. I'm almost out of pre-written chapters, though, so it might slow down a bit.

Anyway, please leave a review to let me know what you think, or if you have any questions. This story starts during Autumn of Draco's seventh year, so there will be a few events throughout that line up with the timing of Deathly Hallows.

Is Draco's character believable? Would Ginny let herself be friends with a Death Eater?