Print Chapter
Report Abuse
Reviews (9)
Next
*Author's note: I do not own anything HP. There is a small reference to Harry Potter and the Halfblood Prince, chapter 27, at the beginning.* 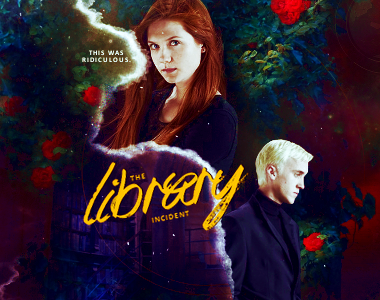 Voldemort already had control of Hogwarts. Snape was the newly appointed headmaster and several Death Eaters were already in position as teachers. Why did he, Draco Malfoy, have to go back?

“They need a student to listen out for any word of Potter,” said his father.

“It’ll be good for you to keep up your studies during this...time…” said his mother.

The reality of the situation was the Dark Lord was still angry that Draco hadn’t been the one to kill Dumbledore. He couldn’t stand the sight of Draco right now, and his parents had been able to convince the Dark Lord to remove him to Hogwarts, hoping that this would keep him safe.

Safe. The thought almost made him laugh. No one was safe.

He was sitting on his bed in the Slytherin dorms, hating everything. Everyone here hated him, and he hated them right back. Snape hated that Draco was weak. The teachers hated Draco for his part in Dumbledore’s death and the brand on his own forearm. The students hated him because, well, he was Draco Malfoy. That seemed to be enough reason for them.

He glanced at his watch, and swore to himself. His free period was over and he had less than 10 minutes to get to his next class. He pulled himself out of his self-loathing (for now) and climbed the stairs out of the dungeons.

He skipped dinner that evening to be alone again. Not wanting to run into any of his “friends” in the common room, he made his way to the the library. He sneaked past the librarian and passed shelves and shelves of books until he came to the thin rope that spanned the length of the entrance to the Restricted Section. With another quick look around, he ducked under the rope and slunk to a secluded corner. His corner, as he considered it. All he wanted to do was sit in his corner and get lost in any book and, most of all, be alone. But when he drew closer he stopped short. Someone was already there. A thin, red-haired girl was curled up in a ball in his corner. Her knees were drawn up to her chest and her face was buried into them. Her arms hung loosely by her ankles.

Draco arranged his features to show the hate and disdain that he was taught to feel, then spoke. “Weasel girl,” he sneered. “What are you doing here?” His voice didn’t match his face. “Disgusting, blood-traitor,” he added, trying sound threatening. “Crying over Potter, are you?”

She looked up at him with her dark eyes. “It’s Ginny,” she said lazily, tired of this argument. “My name's Ginny. And the whole blood traitor thing doesn’t really get under my skin, Malfoy.” She rolled her eyes at him and stretched. She’d obviously been sitting there a while. “I’m here because I’m here. Got a problem with that?” She raised an eyebrow.

Her tone made Malfoy even angrier. “Yes, I do,” he huffed. “This is my corner.” He could’ve slapped himself. He sounded like a toddler..

She laughed. “Your corner?” She looked around with exaggerated false curiosity. “Interesting. I don’t see your name on it,” she said in a sickly sweet voice and looked up at him innocently, twirling her ponytail with her fingers. This angered Draco even more. She was messing with him and he was letting it bother him. He put his hands up to his face, willing himself to not just kill the stupid girl right there and be done with it.

“Will you just get out of here?” he growled at her. He shoved his hands in his pockets and waited for her to move.

Ginny breathed in and bit her lip, pretending to think about it. “Hmm...no.” She grinned wickedly at him.

“Come on! Don’t you have anywhere else to be right now? Move!” He knew he was being childish but for some reason he just couldn’t help it.

“Make me,” she challenged. Her expression hardened and she looked straight into his eyes.

Draco snapped. He stomped up to her and grabbed her arms, trying to drag her out of the way. She cried out and kicked at him, hitting him hard and knocking him against a tall bookshelf next to them. The shelf began to sway and they both froze, staring at it in horror.

The next few moments seemed to happen in slow motion.

Draco grasped the edge of the shelf in an attempt to steady it, but somehow pulled too hard. It rocked back toward them and started to fall. Books began spilling on top of them as it plunged. Ginny couldn’t move. Not thinking, Draco seized her and hauled her toward the wall. He pressed himself against her with his hands on either side, trying to flatten themselves to the wall and be as far from the falling bookshelf as possible. Her face was tucked into his shoulder and her fists gripped his robes, pulling him to her. By some miracle the shelf fell right past them, crashing to the wall on the other side.

Draco and Ginny stayed by the wall, trying to catch their breath. He finally lifted his head and looked at her. His hands rested against the wall on either side of her. She met his eyes, trembling slightly. He’d never been so close to her. He could feel her shaky breathing against his chest. He studied her for a second. Light freckles were scattered across her flushed cheeks, less prominent than those of her brothers’. Her dark red hair was falling out of the ponytail and dust had settled in her long eyelashes. Had she always been so pretty? Draco mentally shook himself for thinking such foolish things. He dropped his hands and stepped away from her, dodging the fallen bookcase.

Ginny didn’t move. Just looked at him in wonder. “Why?” she whispered.

Why? Why what? Why’d he just save her life?

“A simple thank you would do, Weasley,” Draco said impatiently, reverting back to his nasty self. “We can’t be spilling any pure blood, even if you are a blood traitor.”

“I don’t believe that.” She shook her head.

A voice screeched out, making them jump. “What have you done, you wretched children!?” Madam Pince had appeared out of nowhere, and looked absolutely livid.

Both Draco and Ginny ran for it, hopping over the rope barring off the Restricted Section and out of the library, not stopping until they were several corridors away from the library. They leaned against the stone wall, gasping for air. Ginny looked at him, the corners of her mouth twitching into a smile.

“What have you done, you abominable children!?” Ginny mimicked in an impressive imitation of the librarian. She began to giggle. Quietly at first, like she was trying to hold it in, and then louder. Her laugh was infectious. Draco couldn’t help himself. He joined in, laughing until his stomach hurt and his eyes watered. When their laughter died down she looked at him with the same confused, curious expression she had in the library.

Draco just shrugged. “I don’t know.” He stuffed his hands into the pockets of his robes and turned his back on her, walking in the direction of the dungeons. He was about to turn the corner when he heard Ginny’s voice drift to him.

He paused before answering softly, “You’re welcome,” and kept going.

Draco repeated the question to himself once he got back to his dormitory. He lay in his bed with the curtains drawn, not wanting to see anyone.

Why did he save her, anyway? Surely the giant bookshelf would have crushed Ginny, either killing her or, at the very least, putting her through extreme pain. He should have wanted that, right? The only daughter of the biggest blood-traitor family, famous Harry Potter’s old flame, potentially killed. The other Death Eaters would have applauded him. But instead, he had saved her.

Draco turned over, trying to push the thoughts away from his mind. It didn’t matter, he decided. It would be forgotten. Tomorrow he would wake up and he and Ginny would go back to hating each other. There was no point in losing sleep over it. He was okay hating Ginny. That’s how he was raised, anyway.

He tossed and turned for another hour. When he finally fell asleep, instead of dreaming of Dark Marks and torture, he dreamed about soft, red hair and dark chocolate eyes.

*I've always been a fan of Draco/Ginny, so I thought I would try my hand at my own version of a story about them. It's planned to be a bit darker than my other stories, but since it's set during The Deathly Hallows time period, when Snape and the Death Eaters have control of the school, it seemed fitting. Leave a review to let me know what you think of it so far. And, most of all, thanks for reading :)